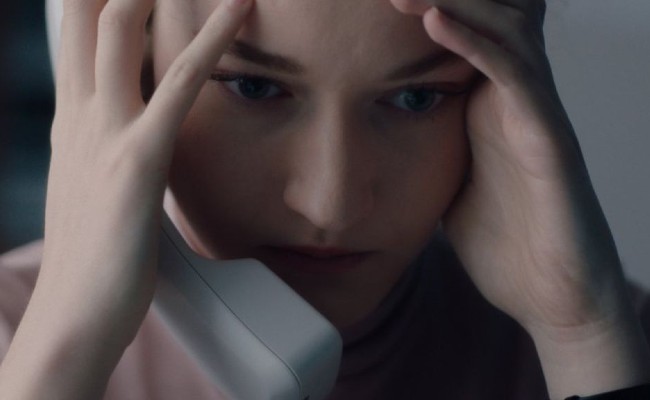 The Assistant is a film that provokes a visceral physical reaction; the churning of the stomach, the gritting of the teeth, the white-knuckle gripping of a seat edge. It has malevolent monsters and horrified victims, and hums with a palpable sense of threat. It is, without doubt, a horror movie. Yet, while writer/director Kitty Green’s sensitively-made yet hard-hitting feature debut plays out in a dark, cold world full of secrets, lies and isolation, hers is no nightmarish fantasy landscape. Instead, she deftly — and devastatingly — lays bare the all-too-familiar fears that come with being made to feel like a voiceless, helpless, insignificant woman in an aggressively male environment.

Here, that woman is Jane (a phenomenal Julia Garner) — perhaps deliberately intended as a ‘Jane Doe’, an everywoman, although her name is barely mentioned on screen — a hard-working young assistant in a fast-paced New York entertainment company. Each morning, Jane arrives before the sun, and anyone else, to get the office ready for the day. Her fixed, sullen expression as she waits for the coffee to brew in the darkened break room, and hurriedly eats two bites of cereal over the sink, is the first indication that she may not be happy in her work.

As the day progresses, we see why. Jane shares a small office with two (unnamed) male colleagues (played by Joe Orsini and Noah Robbins) who, when they are not ignoring her, routinely speak over and belittle her. Menial, degrading tasks like scrubbing the office sofa and placating her boss’s furious wife over the phone (an awkward situation which comes with aggressive consequences for Jane) — two early warning flags — fall to her alone.

Jane’s boss, who resides in the room next door, is an unnamed but obviously high-powered producer with a booming voice and a short fuse. We never see his face. We don’t need to; the shadow of his influence seeps into every corner of the office. Everyone is scared to put a foot wrong in case they lose this so-called “opportunity of a lifetime.” Fawning email apologies for perceived slights are regularly demanded.

This day, however, is different. (Actually, in truth, it plays out much the same as any other but, for Jane, its impact is seismic.) It begins with the arrival of a new, attractive young assistant, Sienna (Kristine Froseth), who Jane is instructed to deliver to a local hotel, to which her boss then disappears for several hours. When they learn of his absence, a group of high-level executives simply roll their eyes and take his meetings; they are, it’s clear, well-versed in the the language of cover-up and just as worried about keeping their jobs as everyone else. Genuinely fearing for the girl’s safety, however, Jane makes a trip to HR to voice her concerns.

And it’s here, in this brisk yet brutal across-the-desk scene between Jane and treacle-voiced, laser-eyed HR manager Wilcock (Matthew Macfayden), that The Assistant lays bare its heart-shattering truth; that even when you find your voice, it’s often impossible to make it heard. Jane’s haltering, tearful attempts to explain her boss’s troubling behaviour to Wilcock are systematically derailed; first by his pseudo-concerned insistence that she is mistaken, then by his questioning of her own character and motivations and, finally, by outright threats to her burgeoning career. “We could use more women producers,” he sneers. “So why are you in here, trying to throw it all away for this bullshit.” As a lone, inexperienced voice she is entirely helpless against such a systemic abuse of authority — and they both know it. “I don’t think you have anything to worry about,” is his knock-out punch. “You’re not his type.” Utterly beaten, Jane returns to her desk and silently types out an apology to her boss.

But this is a film that takes its shape, and finds its power, in these moments of silence. It would be a grave mistake to assume that every feature which deals with #MeToo and the likes of Weinstein (who clearly had a huge influence on the narrative, which is described as an amalgam of many experiences) should be a bombastic call-to-arms, a battle cry against oppression. Here, Green presents something equally as valuable; a recognition of the reasons why it often takes so very long, and the efforts of so very many women, to bring sexual abusers to anything resembling justice. It’s an acknowledgment that putting your head above the parapet, your voice on the record, is utterly terrifying; to do so in such a toxic environment, to rail against a system that has always been rigged against you, takes near-superhuman courage. Many individual battles are lost before the war can be won.

That — appallingly — Jane’s story is far from unique means that the specific details of this narrative are not as important as its tone of insidious iniquity, which Green nails with ferocious authenticity. Drawing on her non-fiction background (Ukraine Is Not A Brothel, Casting JonBenet), she brings a low-key documentary-style observational approach, with the focus firmly on Jane. Crucially, Jane can be always be trusted in her assessment of events — her boss’s noxious behaviour is never in doubt — and her response is entirely understandable given the toxic environment in which she finds herself.

It’s an astonishing performance from Garner, who takes a 180-degree spin from the outspoken Southern firecracker she plays in Netflix series Ozark (a role which has rightly earned her an Emmy award). As Jane, she has a reserve — a poise, even — that we come to realise is her battle armour; her clenched jaw and downcast eyes are her weapons against each awful day. Occasionally cracks appear — a brief yet emotional phone call to unsuspecting parents, that soul-destroying HR meeting — but Garner mostly keeps that maelstrom of feeling bubbling just under the surface. She, like the film, positively vibrates with unspoken anger and bitter resignation.

Cinematographer Michael Latham (who also lensed Casting JonBenet and Gabrielle Brady’s haunting 2018 documentary Island Of The Hungry Ghosts) expertly follows Garner’s lead, keeping his camera low, stalking through grubby, gloomy corridors. Framing is tight, claustrophobic; we never know what may lie around the corner. Music is as sparse as the muted colour palette. Like Jane, we feel utterly trapped and, as the credits roll, there are no swelling chords, no relieving sense of justice or change. Indeed, The Assistant’s greatest strength is that it forces us to understand just how easy it is to turn the other way, to essentially become complicit, because it’s simply impossible to do anything else. It also demands that we pay attention to those who are brave enough to take a stand; that it is up to all of us to amplify individual voices that would otherwise go unheard.

An edited version of this review was originally published in Sight & Sound, May 2020