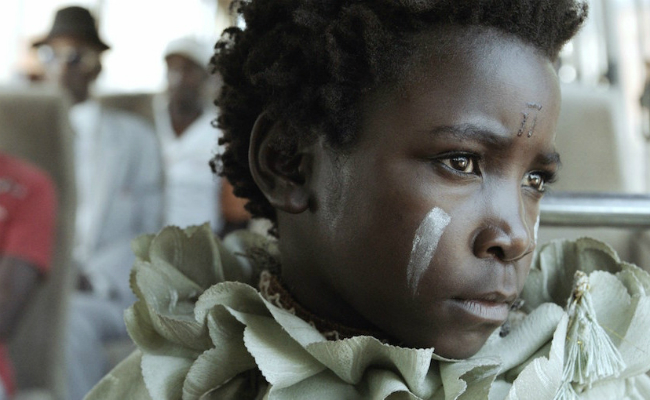 Ancient tradition and modern capitalism collide in this striking, and strikingly confident, debut feature from Zambian-Welsh filmmaker Rungano Nyoni, who draws on her dual background to craft a tale rich in murky superstition and clear-eyed social commentary. It is set in the small communities around Zambia’s capital Lusaka, whose inhabitants wear modern clothes, listen to Western music and place great faith in old ideas of spirits and witchcraft.

The film underscores this cultural dichotomy in an eloquent opening sequence, set to the anachronistic strains of Vivaldi, in which a busload of tourists visit a witch camp to gawp at a clutch of elderly women who, their faces painted white, stare impassively before letting loose with grimaces and howls. They are all tied to stakes with huge spools of white ribbon so, it is explained, they do not fly away.

In the first of the several deft, disorienting hard cuts, the film then moves to the quiet of a rural well, from which a woman draws water only to immediately spill the bucket, blaming her misfortune on the young girl standing in her path (exceptional newcomer Maggie Mulubwa) and running from her screaming. The girl’s efforts to bring the water back to the woman’s home results in her being proclaimed a witch.

This early scene, in which incredulous local Officer Josephine (Nellie Munamonga) listens to wild accusations she clearly doesn’t believe yet is moved by community feeling to call government agent Mr Banda (Henry BJ Phiri), further sets the tone. That such beliefs may appear foolish to outsiders — and, likely, many modern African people — but still retain their power is the dramatic impetus of the film. It’s to Nyoni’s credit that she manages to make the point, as well as call attention to the region’s inherent misogyny, without poking fun at those who genuinely believe.

I Am Not A Witch is, however, designed to highlight the complicitness of a government that condones such subjugation, and the tourists who enable it, as well as the grasping greed of profiteers like Banda. Overweight, sweaty and besuited, Banda choreographs a farcical ceremony involving a chicken, proclaims the child a witch and takes her away to the camp. There that she is finally given a name by the other women; Shula, meaning uprooted.

As time passes, there is a sense that Shula is managing to find something of a home among these women; fellow outcasts, they are kind and maternal, even as they inflict on her the pi-shaped scars they all bear on their forehead. In one scene, Shula rests her head on one of the camp’s elders as they sit around the fire, a moment of security that is entirely fleeting.

As well as entertaining tourists and working in Banda’s fields, the witches are carted out to settle community disputes and perform spells — particularly for desperately needed rain. When Shula, through sheer dumb luck, correctly accuses someone of theft, Banda wonders whether she might actually have powers – though, for him, this just means further financial opportunity. At this point, Shula completely loses control of her own life, as Banda and his overbearing wife train her in the ways of showy witchcraft and demand total obedience. When she refuses to perform, she is punished with solitary confinement inside, ridiculously, a huge clown head.

This abhorrent treatment is viewed as entirely justifiable by the Trump-like Banda; with egotistical, blustering buffoonery, he tries to manipulate the government, the paying public, the witches and – in one scene where he takes Shula onto a talk show to sell ‘special’ eggs – the media. “Freedom of speech should not be misused,” he says, when a caller accuses him of exploiting the girl. “What if she’s actually just a child,” replies the host; Banda has no answer.

Still, he has influence on those around him. Even Shula eventually succumbs to the fate he has dictated; perhaps realising she has no viable alternative. Dragged —  literally — from the small school  she has briefly attended, she spends hours performing a rain dance until she collapses and is taken to coalesce at the camp.

The narrative’s exploration of an alternative human experience is underscored by stunning, evocative cinematography from David Gallego (Embrace Of The Serpent), which turns the African vistas into an alien landscape. There are many arresting images; a tight focus on Shula’s face as she is dragged through the dust by her ribbon, an aerial portrait of the blue-clad witches on their orange truck; white ribbons flapping against the blue sky.

Editor George Cragg uses a combination of long takes and sharp cuts to convey the shifting nature of Shula’s reality – moments of surreal humour, fleeting happiness and abject fear as her destiny is decided by others. And the eclectic, expertly assembled soundtrack ranges from indigenous music to classical strains and a surprisingly poignant use of Estelle’s ‘American Boy’.

The latter comes in a late sequence where a man listens to the song on his headphones as he dumps a small, sheet-wrapped body in a field. That it is Shula is clear, even though we saw her alive in the immediately preceding scene, such was the inevitability of her fate. The film’s final moments, in which fellow witches run to retrieve her body, ribbons trailing, and give her their own send off, are desperately moving. And when the rain finally comes, it is a cathartic moment of raw emotion and beauty.

This review was originally published in Sight & Sound, November 2018